The two most common sources of roof leaks on a foam roof (or really any type of roof) is skylights and scuppers. Generally when a roof leaks it’s because of a failed penetration on the roof. Leaks are usually not found in the membrane it’s self. Curb mount skylights are the easiest type of skylight to change and usually come in 2 common sizes 2′ by 2′ or 2′ by 4′ and are avalible from home depot or lowes. It should be noted that they will carry single and double dome skylights, the difference being a single dome has one lens where a double dome has two lenses. If the space under the skylight is liveable space it requires a double dome, if it is not liveable then you only need a single dome. I recommend double dome sklights no matter where they are going it’s twice the protection for about $10 more.

In the picture below it shows a picture of a skylight that has been sealed shut and no longer functions correctly. This pretty common thing being done and it only woks in the very short term and should not be done. The time it takes to seal it up and the price you might pay someone to do this you could have replaced it for less. 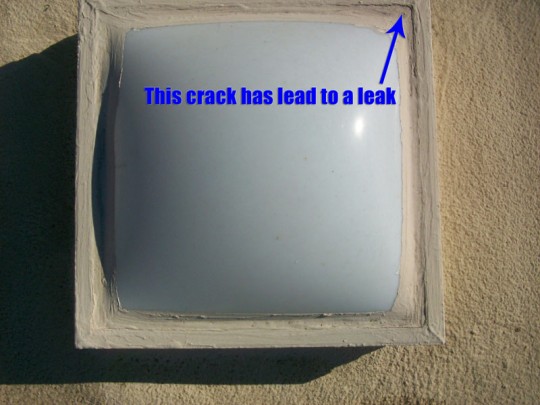 In this next picture it shows how a skylight functions. 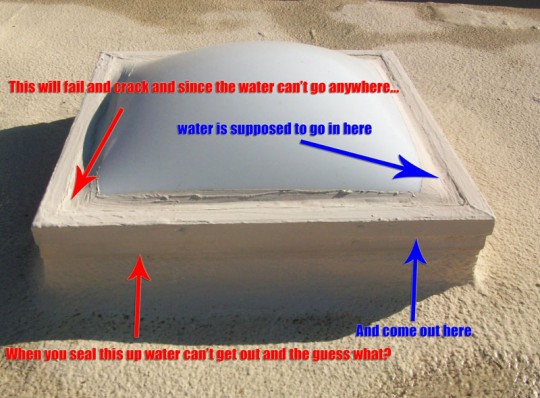 functioning parts of the skylight

In This last picture it explains how to remove the skylight 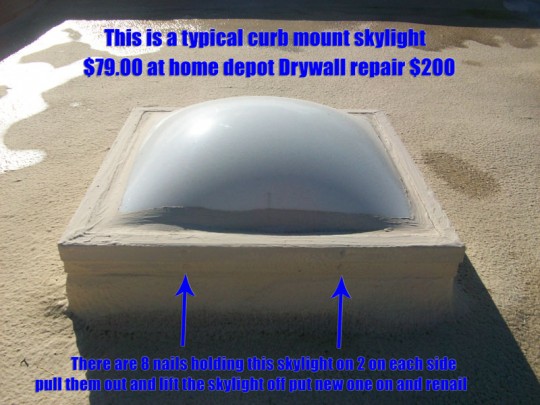 Be sure to remove all 8 nails or screws before removing

Removing and replacing skylights isn’t as hard as you might think. Find the nails or screws holding the skylight on remove them and the gently pull the skylight off. Once you have it off put the new one in place and push it down so that it’s flush against the top of the curb then nail it in place. You can probably remove and replace on of theses in about 15-20 min.

Photo Of The Day